SymCode: The Symbolic Barcode for Humans and Machines

This is our story of the design and implementation of a symbolic barcode system. Try the Demo Web App on symcode.visioncortex.org.

If you are lucky enough to live in a place where an Amazon Go store is nearby, you definitely should visit it. It is packed full of esoteric technology that enthusiast like us get super intrigued. One item that caught our eyes was the labels on the salad and sandwiches in the ready-made food section.

Photo within an Amazon Go store

There printed a matrix of cute little circles and squares! It must be a barcode of some sort. Our attempt to decipher the 'Amazon Reversi Code' was futile, but this is the start of the story.

A bit of context for the unfamiliar reader, the name Barcode is referring to the labels we still find in virtually every packaged products today. Barcode encode data by varying the widths and spacings of the vertical bars, which are to be scanned by a laser beam crossing horizontally. With the advent of image sensors, 2D barcodes were developed, where QR code and Aztec Code are some of the most well-known.

This framework has aged well and they are quite robust and low-cost to implement in embedded systems. However, they are meant to be read by machines and not by our naked eyes. They are not designed for aesthetics and are impossible for humans to comprehend.

Our goal is to design a barcode system that are both human-readable and machine-readable. We now turn our attention to human readability by studying human languages.

Machines run on bits, so we can say the alphabet consists of 0 and 1. In human languages, we have a larger set of alphabets. In English, we have 26 distinct lowercase letters. In Korean, characters are constructed by composing 2 to 6 elements from a set of 40 distinct Jamo.

There is a direct tradeoff between information density and visual ambiguity. If the symbol set is too large, humans would have difficulty in remembering all of them. In addition, there may be some visually similar symbols that are hard to disambiguate. If the symbol set is too small, the same message has to be encoded with more symbols, which again, humans often have a hard time in processing long strings.

We determined that a symbol set in the range of 16 to 64 symbols is a good balance.

With the above rules in mind, we designed a minimalistic symbol set. Each symbol is composed of multiple triangles, the basic geometric primitive. Each symbol is symmetric or anti-symmetric in overall, but exhibits asymmetry internally. They are like Tangram, in which a human child can easily reproduce the symbols by assembly some triangular pieces together.

The next section would quantitatively analyze and justify this design methodology.

The naive way to match a shape against a symbol set is to perform a linear search, XOR it with every symbol and then chooses the one with the lowest delta. It works in principle, but is inefficient. Ideally, an algorithm can condense a complex shape into a feature vector, which we can lookup in the feature space of the symbol set for the nearest neighbour and arrive to a match.

Instead of using an array of real numbers, we devised that an array of bits are sufficient to capture the essence of symbols, and from now on we refer this bit string as 'trace'.

Now, let us take a closer look at the lowercase English alphabet set to illustrate this idea.

First off, we can classify the 26 alphabets as either tall or short, giving:

Next, we can divide the letter into two halfs horizontally and compare their weights:

Then, we can divide the letter into two halfs vertically and compare their weights:

At this point, we had the following:

Which is a surprisingly good classifier using only three comparisons. We can do more trinary comparisons on smaller partitions to further differentiate the collisions, but our investigation on English alphabets ends here for the scope of this article.

Our trace for SymCode symbols follows a similar scheme. We define the symbol traces starting from the three comparisons defined in the previous section.

The pixel count in each of the four quadrants of a symbol (in order of top-left, top-right, bottom-left, bottom-right) are denoted by non-negative quantities a,b,c,d respectively, the three comparisons are defined as follows:

Below are two examples: 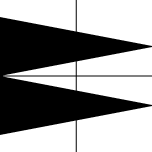 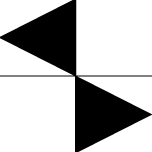 Each comparison has 3 possible outcomes (<, >, ~). For simplicity, we assign 2 bits to encode each comparison. Therefore, this naive implementation uses 3 * 2 = 6 bits to store each trace.

The above worked well enough for sets of 16 symbols, but it was found inadequate for 32 symbols. Acute32 requires more comparisons for traces. 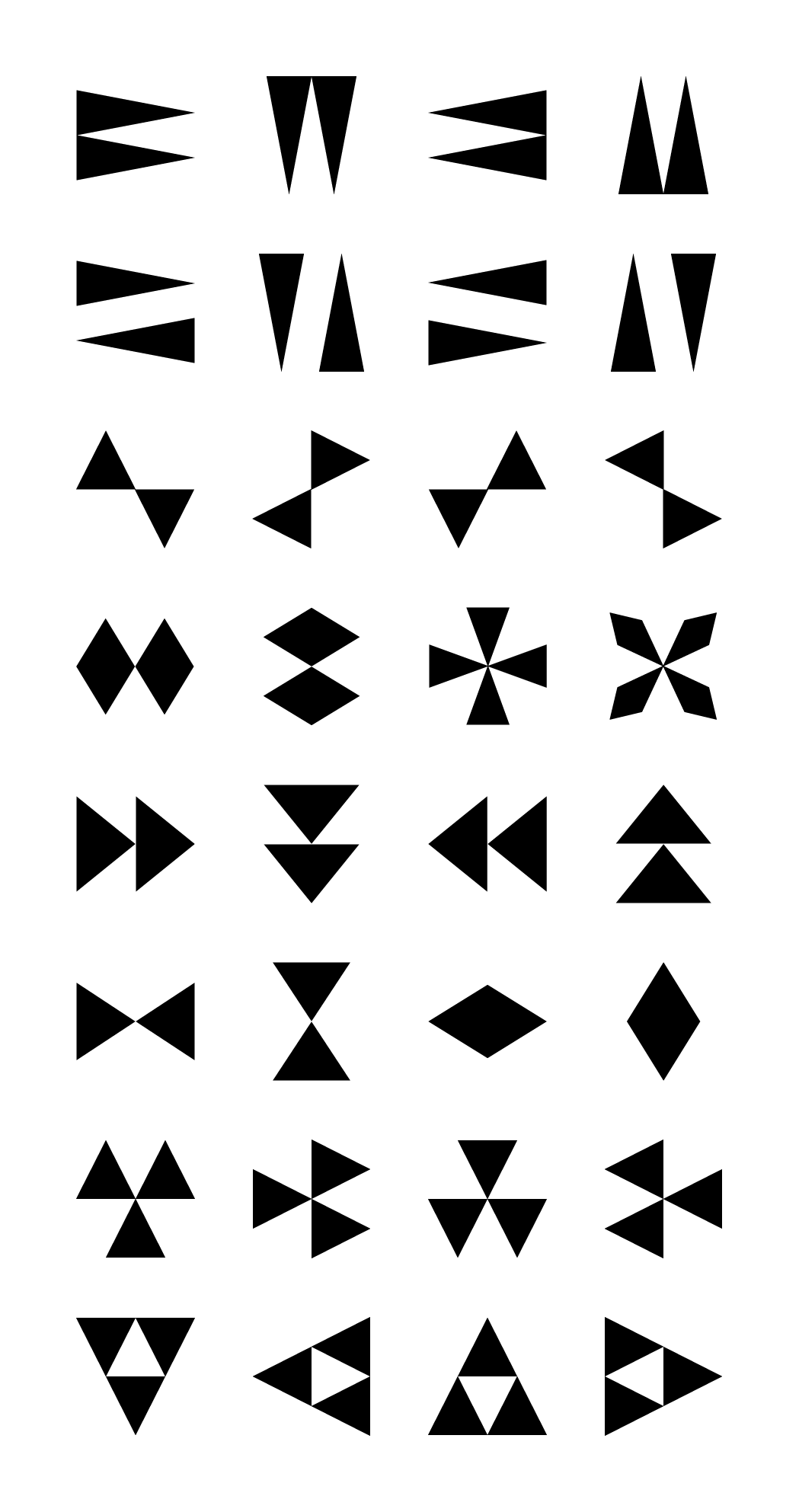 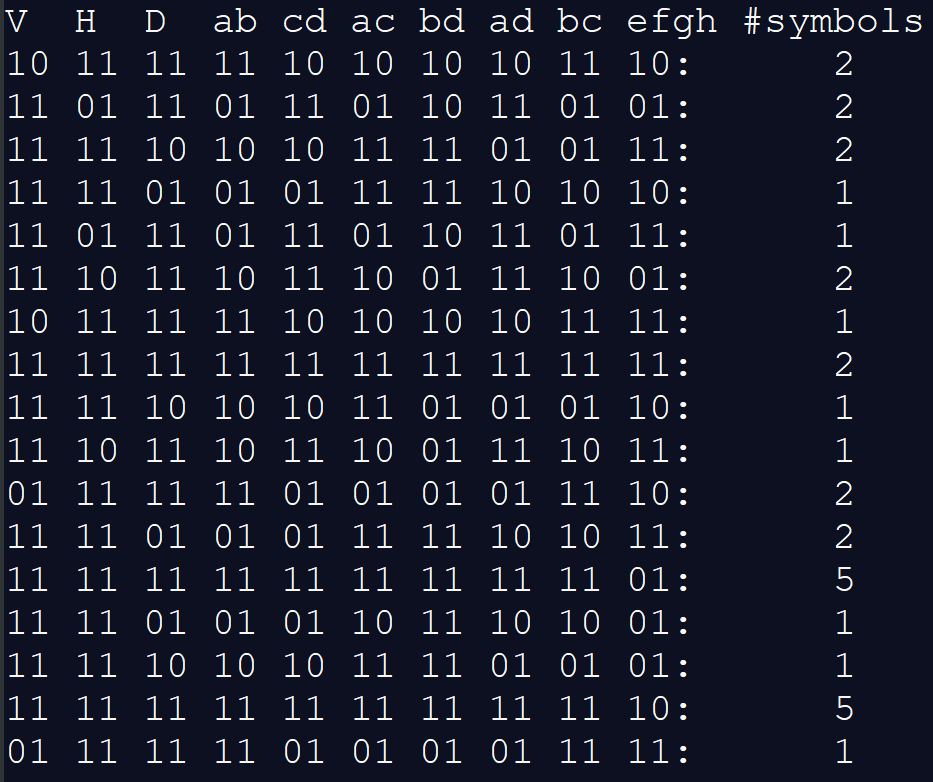 The trace partitions the symbol set into smaller, mutually-exclusive subsets. This enhances robustness against noisy inputs.

As searching through traces is much more efficient than comparing with each symbol individually, traces also help with performance.

Most importantly, it provides us a guidance in designing the symbols to maximize differences within the symbol set.

Each stage below begins with a more general description of the processing stage (general across any SymCode), followed by explanation of the implementation of Acute32.

We first binarize the input color image using an adaptive thresholding strategy, shapes are then extracted from a binary image by clustering.

The goal of this stage is to find the positions of all finder candidates in the frame.

A minimum of 4 feature points is needed because at least 4 point correspondences are required to fit a perspective transform.

Acute32 uses circles as finders because they are distinct from the heavily cornered symbol set. The 4 finders are arranged in a Y shaped manner to break the rotational symmetry with itself.

The advantage of using a circle is that, in general, it always transforms into an ellipse under any perspective distortion, making it relatively easy to detect.

The disadvantage is the lack of corners in circles. It is too easy to detect false positives because there are indeed many circles in real life.

In essence, this stage chooses the correct perspective transform to be used in the next stage.

Each perspective transform converts the image space into an object space (but not necessarily the correct one) and is defined by (at least) 4 point pairs (source and destination points), where each pair consists of a point in the image space and the other one in the object space.

It is inefficient to accept each transformation and generate k object spaces to proceed to next stage. Therefore, we need to design a method to evaluate each transform and chooses which ones to proceed. The simplest way is to define some extra feature points in the object space as check points, which are re-projected to the image space, and check if the feature exists there, and reject the candidate otherwise.

The re-projection method mentioned above could not work for us because circles do not provide extra feature points for us to verify.

Instead, we take each of the k perspective transforms and calculates an error value.

Our metric of evaluation relies on magnitude and direction of the difference vector. 4 vectors interest us here: the vectors from the centres of finders to the image check points, and we denote them by v1 to v4 respectively. 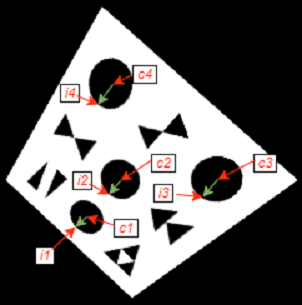 Transform evaluation points and vectors: the 4 green vectors are v1 to v4

We observed that given a correct transform, the 4 green vectors are consistently pointing in the same direction, with their magnitudes less uniform but still very similar. We found it effective to choose the transform with the minimum variance among v1 to v4.

In the previous stage, we have obtained a perspective transform which converts between the image and object spaces. Next, we're going to rectify the input image into a code image, and recognize the symbols on it.

Once we have a transform that we believe is correct, the object space can be obtained by applying it on the image space. We sample the image with bilinear interpolation. 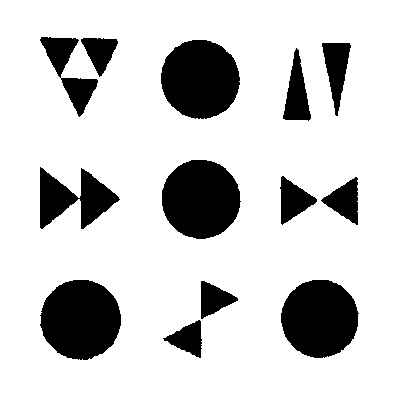 Assuming the transform is correct, the coordinates of the symbols on the code image should be close to the anchors we defined in the object space. 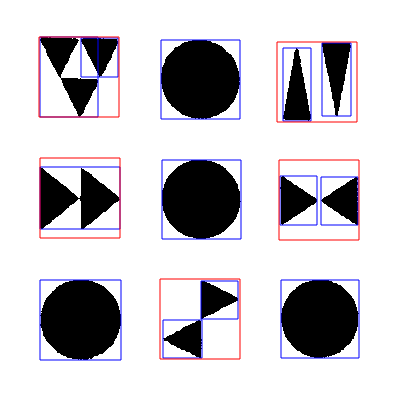 The bounding boxes in blue are all clusters found on the code image. The boxes in red are the grouped clusters used to recognize each symbol.

Once we have the images, we can evaluate their traces and compare them with the ones in our symbol library, obtaining a small number of candidates for each symbol image. Each of these candidates is compared to the symbol image and the one with the lowest delta is the final recognized symbol.

Each symbol is mapped to a unique bit string, and they are concatenated into a longer bit string.

As there are 32 symbols in the set of Acute32, each symbol can encode 5 bits. There are 5 data symbols and 4 finders in the 3x3 configuration. It can easily be extended to a 6x4 to carry more data. For now, each SymCode instance encodes 25 raw bits, where 20 bits are payload and 5 bits are CRC checksum.

We developed a theoretic as well as a programming framework for designing and implementing symbolic barcodes. The programming library is available as symcode. For those who simply want to integrate SymCode into your application, please refer to the wasm distribution acute32 which is ready to use in any browser based Javascript projects.

This story is a manifest of the philosophy behind Vision Cortex, and a glimpse of the ongoing research and development by the Vision Cortex Research Group.